The second city on our trip was the hot and steamy Kuala Lumpur. Our 3 nights here have completely flown by and I am currently writing this from the plane on the way to Bangkok!

We landed at lunchtime on Monday and got the KL Espres train directly to KL Sentral (a speedy 30 minutes and free wifi on board) and then had planned to change to the green line to get to our hotel. Well, it turns out that the KL subway system has 2 different green lines and we got on the wrong one. Eventually, after a couple tantrums, waiting yonks for a monorail and walking a lot from station to station, we got to our hotel! And the moment we got to our room ready to drop our bags and head out to explore, a huge thunderstorm started. Of course it did.

An hour or so later when the thunderstorm had subsided a little, we headed out on a walk to see KLCC park and the Petronas Twin Towers. An advance warning for potential visitors to KL – a zebra crossing here may look exactly the same as one back at home, but in Kuala Lumpur the cars will not stop for you and you will probably die. Also, motorcyclists don’t care about red lights/pedestrian pavements/loss of life so have your wits about you at all times.

When we arrived at KLCC Park with all limbs amazingly intact, the Petronas Towers looked STUNNING. So many gorgeous photo ops in the park and lots of places to sit in the sun and take in the view.

The mall underneath the towers is enormous and has everything from supermarkets to designer stores to Marks and Spencer’s and it even houses a cheeky Nando’s. We ignored the peri-peri chicken and instead headed to the food court to see if we could try something a little more authentic. As with nearly everywhere in Asia, finding authentic food that’s also gluten free was difficult. I checked out all the stalls before deciding that my safest bet was a Rendang beef curry with plain rice. It was yummy! Ewan also tried a canned Chrysanthemum Tea which was interesting (read: rank).

The Towers (and actually the whole city) are even more stunning at night when they are lit up against the night sky, and the fountains in the park light up and play music after dark. We also walked home through a little rainbow forest which was dreamy. 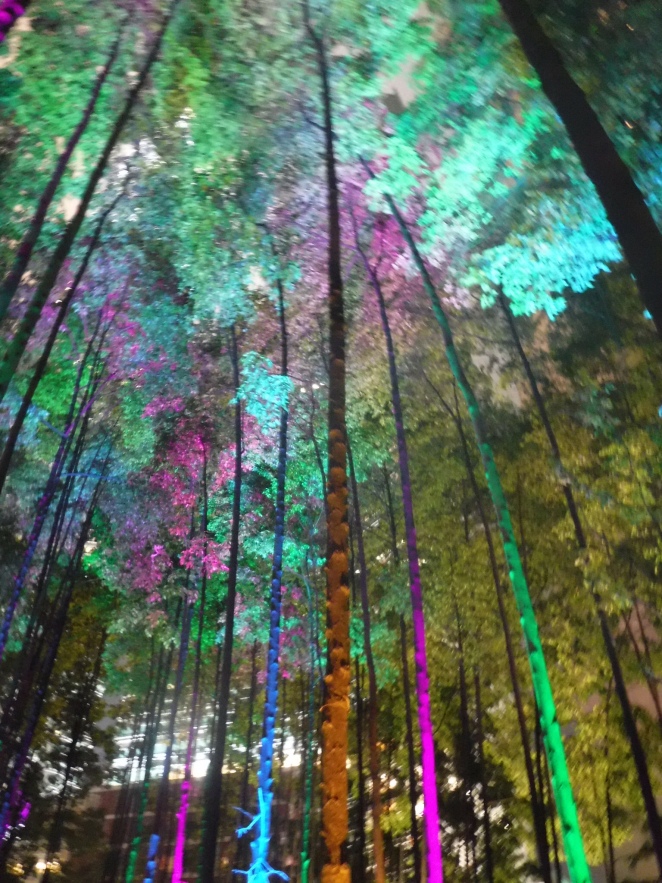 The morning after we headed to Batu Caves via bus & train. I had read that you have to have your shoulders and knees covered to go in as it’s a place of worship, so I put on my most sexless and unflattering outfit (photo of this below – you’re welcome) and off we went. Sadly, my outfit was apparently not covered enough and I was made to pay to rent a sarong. Ewan, the slut, had his knees completely visible but was allowed in sans sarong. Go figure. 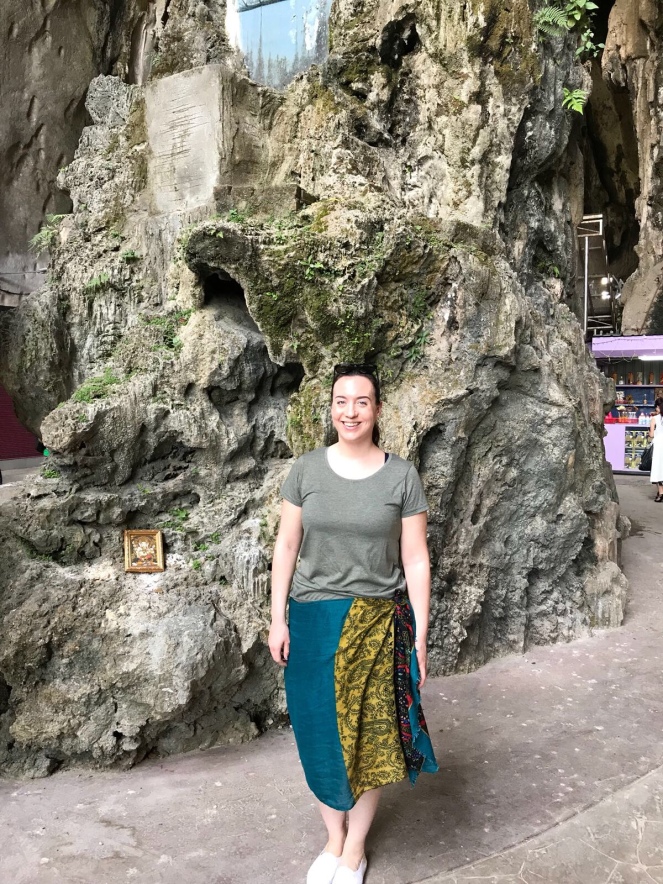 The first thing you’ll see at Batu Caves is the enormous gold statue at the bottom of the steps. The second thing you’ll see are stray dogs and monkeys. For monkey fans, you will probably be in your element. If you’re a person who is afraid of most things (like me), you will probably not be. However, I can honestly say that those 272 steps in 36 degree heat were EASY because I was running on nothing but fear and adrenaline. I had one break in which I forced Ewan to take my backpack in case it attracted the monkeys as they are known to steal things off tourists and can bite if they have to fight for it. Basically what I’m saying is I was quite happy for Ewan to be attacked as long as I saved myself. Picture below of a monkey with a stolen drink.

Once you’re up the steps, the caves themselves are actually pretty underwhelming. They are currently going through extensive rebuilding inside the caves though so maybe that’s why! On the way back down, I put my hand in a huge, bright green pile of monkey poo. Yay.

Once back in KL Centre, we got a taxi to the historic centre and took some gorgeous photos of the area. We found ourselves conveniently inside Central Market when a thunderstorm started so decided to shop for some of those hideous long trousers that EVERYONE wears when in Asia, in preparation for our temple visits in Thailand. You know the ones I mean; baggy and covered in elephants. 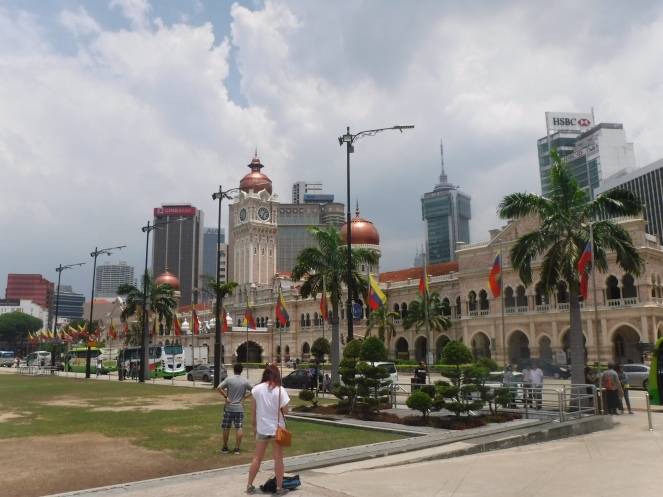 The very tactful owner of one store greeted me with, ‘Yoo-hoo Madame, the larger sizes are over here’. Because I was actually slyly trying to look for the stretchiest ones, I followed him and practised my super impressive bartering technique on him:

‘How much are these ones?’

We headed to the crazy-busy, food-filled street Jalan Alor that evening for dinner and finally got to try Chilli Crab. It was good but an absolute pain in the ass to eat! 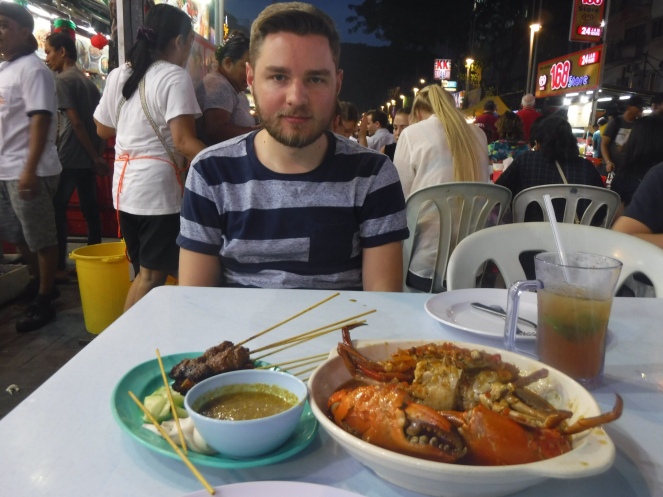 Our last day in KL was a bit of a washout. There was SO much rain all day long. We wanted to go up KL Tower but the Sky Deck was closed due to the weather, so we plumped for the observation deck instead and thankfully could still see most of the city from it!

It cleared up a tiny bit and we were able to get out for a wander around Little India, before finding the most delicious place inside Sentral Mall for lunch. I had the most incredible Nasi Lemak (a rice dish cooked in coconut milk and pandan leaf) and tried a naturally gluten free dessert called Lapis. They do them in all different colours and flavours!

That evening we headed to see the stunning Petronas Towers again and stopped for dinner in Malaysian chain restaurant Madame Quan’s. There weren’t a huge amount of gluten free options so I had my second Nasi Lemak of the day! I wanted to have an alcoholic drink with dinner but Asian restaurants seem to offer beer but not much else, which is obviously no good for me! However, we found a bar that sold wine by the glass later that evening and I now understand why wine isn’t so big in Asia… we had an absolutely terrible glass of Shiraz while watching the fountains and it was enough to put me off wine for at least a week!

We got a taxi back to the airport for our flight to Bangkok because we couldn’t stand the thought of getting on KL’s public transit system again, and ordered our taxi from the hotel front desk. As our taxi arrived, the receptionist shouted out to us, ‘by the way, your taxi driver is deaf.’ To start with we were a bit worried how safe this was in insane traffic, but he turned out to be THE CUTEST MAN IN THE WORLD/safest taxi driver in Asia and left us with a lovely memory of Kuala Lumpur.

Side note for gluten free peeps: KL airport has NOTHING that you can eat once you go through security so eat before if you can. I ended up having a bag of Starbucks sour cream and onion crisps for breakfast.